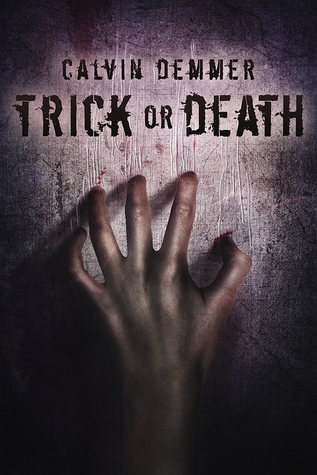 I’m really loving all of the Halloween short stories I’ve read in October, this one included! I’ve recently read Calvin Demmer’s collection The Sea Was a Fair Master and thoroughly enjoyed it, so I was eager to read “Trick or Death.”

The story sets out suspenseful as it opens up on Halloween night with a man dressed in a scary costume hiding on an old lady’s front porch. I always assume the worst, so of course I thought the poor old lady would be harmed when she opened the door after the man’s doorbell ring. He risked giving her a heart attack at the very least, as he jumps out at her yelling “Trick or Death!” The old lady figures it is just a trick-or-treater and overcomes her panic, and sure enough – the man is just a friendly neighbor guy named Barry with his accomplice Rose, going door to door to scare the crap out of people and record their reactions for his YouTube channel. Social media engagement is low for Barry, and to spark some social media love, he thought he’d film some Halloween hijinks.

The first couple houses go without any real hitch, but then Rose winds up telling him the pranks are stupid and she’d rather just hang out at her place…alone. Torn between getting more videos and spending an evening with Rose, he ends up compromising with her – one last video recorded on his own and he’ll catch up with her later. He had one more house to visit, an old “acquaintance” from his childhood that would never suspect to be bothered by scary trick-or-treaters (they’re usually harmless, much-younger children, after all).

Barry should have chosen his next victim more carefully.

I won’t say any more about the plot, but it had a very unexpected ending for me. I have a bad habit of trying to figure out the ending of stories. I don’t know why I do it, I just do. But this ending was very different from what I expected, and was a very good one.

The moral of the story: there’s only so much you should risk when boosting your social media engagement levels. Or quite simply, maybe don’t do pranks on Halloween night :).

Great read, check it out!